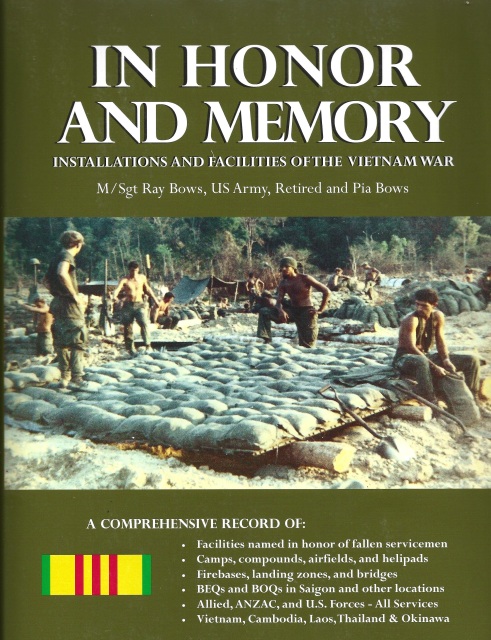 IN HONOR AND MEMORY -   Installations and Facilities of the Vietnam War, 800 pages, Hardbound,

This beautifully presented book gives comprehensive details of over 800 named installations and facilities in Southeast Asia,   including Vietnam, Cambodia, Laos, Thailand, Okinawa, and Guam, which were named for U.S.,  ANZAC, and allied servicemen (all services). Fully illustrated with over 1,000 black & white photographs.     Not available in bookstores.

For international shipping rates please contact us.
Add to Cart
"In the constant unit movement and redeployments, bases were constantly being built up and torn down.  This seemingly in-coherent process allowed combat units to honor men who had been courageous or painfully missed.  It is wonderful we now have a guide to recall the men that these units chose for their inspiration.  This book will become a classic Vietnam reference."
Les Hines, 123d Aviation Battalion
Historian AMERICAL Division Association

"IN HONOR AND MEMORY serves as a wonderful tribute to our brothers-in-arms, highlighted within its pages.  M/Sgt Bows addresses each of these veterans with the dignity, honor, and respect they truly deserve.  The amount of research devoted to this important resource is mind blowing."
1SG Daniel P. Gillotti, US Army, Retired
Author of History of the 30th Field Artillery Regiment from 1918 to 1998

"A definitive work -  If you want to gain knowledge of the war in Vietnam, from all aspects and all services, take your time to reflect upon these pages.  There is something here for everyone."
Senior Master Sergeant Fred Fiedler, US Air Force, Retired
US Army Special Forces and USAF Air Commandos

"IN HONOR AND MEMORY is an unprecedented work detailing tributes and monuments to fallen servicemen which took many forms throughout Southeast Asia.  Master Sergeant Ray Bows recognizes these unsung heroes in this unimaginable undertaking of research, time, and effort.  It acknowledges men memorialized throughout Vietnam, where those of us who served were either based or paused.  Until now, most of us never knew the details of why these names graced such places."
Bruce Swander, US Marine Corps 1966-1970
Vietnam veteran and historian
"MSGT Ray Bows has, with IN HONOR AND MEMORY, done another huge favor for Vietnam War researchers, authors, veterans and a curious public.  This 800-page book provides a meticulous catalogue of American facilities during the Vietnam War -- bases large and small, BOQs, BEQs and memorials -- which were named for individuals who had fallen in battle in this war of our youth.  MSGT Bows not only tracked down the names attached to hundreds of these long-vanished facilities, but shares the stories, backgrounds and photographs of the men they were named to honor.  With the publication of IN HONOR AND MEMORY Ray Bows has ensured that the names and memories of our comrades will live on in history."
Joseph L. Galloway
co-author of We Were Soldiers Once...And Young;  We Are Soldiers Still'  Triumph Without Victory: The History of the Persian Gulf War

Download File
Listed here are some  of the locations included in the main text of the book.  Chapter Two includes all BEQs and BOQs in Saigon, and locations not named in honor of someone such as FSB Ripcord are listed by province in the back (pages 676 to 687) and are not mentioned in the index.